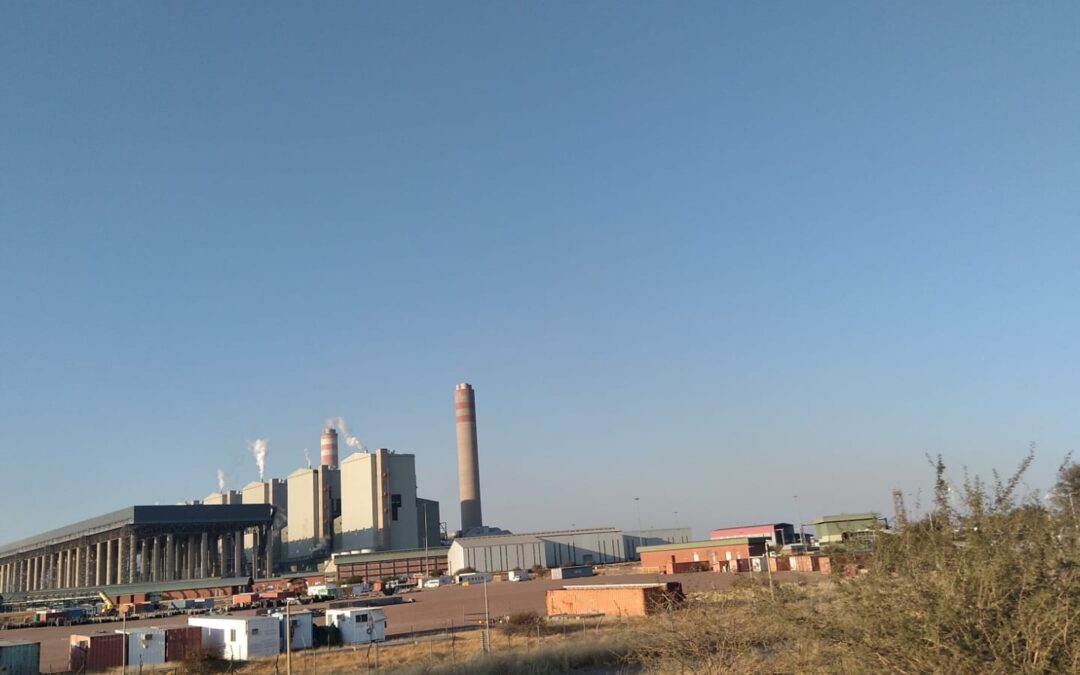 While news of the ‘completion’ of the Medupi power station has been met with both celebration and scepticism, women in Lephalale (in Limpopo) and surrounds, however, are filled with dread of having a pollution-intensive coal-fired power station in their backyard and running at full capacity.  In addition to the obvious carbon emissions, Medupi will also emit other dangerous and life-threatening pollutants common for coal-fired plants – including sulphur dioxide, greenhouse gases, nitrogen oxides (NOx), to name a few – into the air.

Lucy Pitse Duba, an activist working with the community-based organisation Women of Change, says that she is concerned about the harmful effects of the air pollution and ash, which can be seen coming from the structure. She says, “These and water scarcity are huge issues for the communities in these areas. Why has it taken Medupi 14 years to complete? In my view, they have hired unqualified people and it is costing taxpayers money. We are not happy at all. Even now, it is not complete.”

It is important to note that the initial approval for Medupi’s business case depended on Eskom’s commitment to install the required pollution-abatement technology within six years of commissioning. At the time, flue-gas desulphurisation (FGD) technologies were proposed. And though there have been down times to deal with design flaw issues, six units at the plant have been operational for more than a year. While Eskom is allowed to continue to break the law regarding minimum emissions standards (MES), surrounding communities must live with air filled with toxic sulphur dioxide, on top of the carbon emissions.

“It would have taken close to two years to install the FGD equipment, a process that has now been scrapped. This means that Eskom is still looking for a suitable technology to replace FGDs, and who knows how long that will take. So, you tell me, what do we have to celebrate, when we must live with sulphur dioxide pollution indefinitely? And what is worse, is that many households here in Lephalale, neighbours to the biggest coal-fired power station in the world, do NOT have electricity! From where we stand, Medupi is in no way good news for us,” says Duba.

According to Elana Greyling, another local activist working with the Concerned Citizens of Lephalale, “To make matters worse, promises of development in the area remain unfulfilled. Over the last fourteen (14) years, they have brought us nothing but hardship. Yes, there were those who gained financially from the project, but as for the community of Lephalale, we are suffering. We are so tired of empty promises.”

“In the aftermath, Lephalale has many empty houses and businesses in a state of neglect. Unemployment is higher than ever before. Those who got three-month contracts are now mostly unemployed. In addition to the degrading water infrastructure, sewerage pollutes our river and our municipal infrastructure is severely overburdened. This is not good for a region that already lacks water. So many people are sick and on top of this, still have to deal with a steep rise in crime. But this does not bother Eskom. They say they have reached the targets they should have with Medupi,” adds Greyling.

Greyling and Pitse say that the World Bank should be holding Eskom accountable for not honouring its loan agreement, which requires that FGD technology is installed. At this stage the two-power station emits three times as much SO2 than the whole of Britain.

“Lephalale, once beautiful and luscious, looks like an old woman now. You can see her former beauty, yet in places you see she has lost a tooth and there is no money to dye her hair anymore. She looks tired and beat up. This is Eskom’s Medupi legacy in Lephalale. “Even though government is trying to tell people that there is something to celebrate at the Medupi power station, we know it is not true. We have been paying for fourteen (14) long years for a pipedream, of outdated fossil fuel technology, and we are tired of it,” laments Greyling.

Earthlife Africa’s Director and member of the Presidential Climate Change Commission, Makoma Lekalakala says, “Medupi, Kusile, and the Musina-Makhado Special Economic Zone (MMSEZ). These are all projects that will keep South Africa dependent on fossil fuels, such as coal, for the foreseeable future and are obstacles in our efforts to mitigate climate change. The extreme weather events and climate change-induced natural disasters like floods, droughts and rising temperatures will only get worse.”

“The time has come for the just transition to socially inclusive renewable energy, for the good of all South Africans, into the future. This type of decentralised energy system has a better chance of empowering our people and will help the country end its dependence on coal,” concludes Lekalakala.

For more information or to add to the conversation, find Earthlife Africa Johannesburg on Facebook and Twitter.