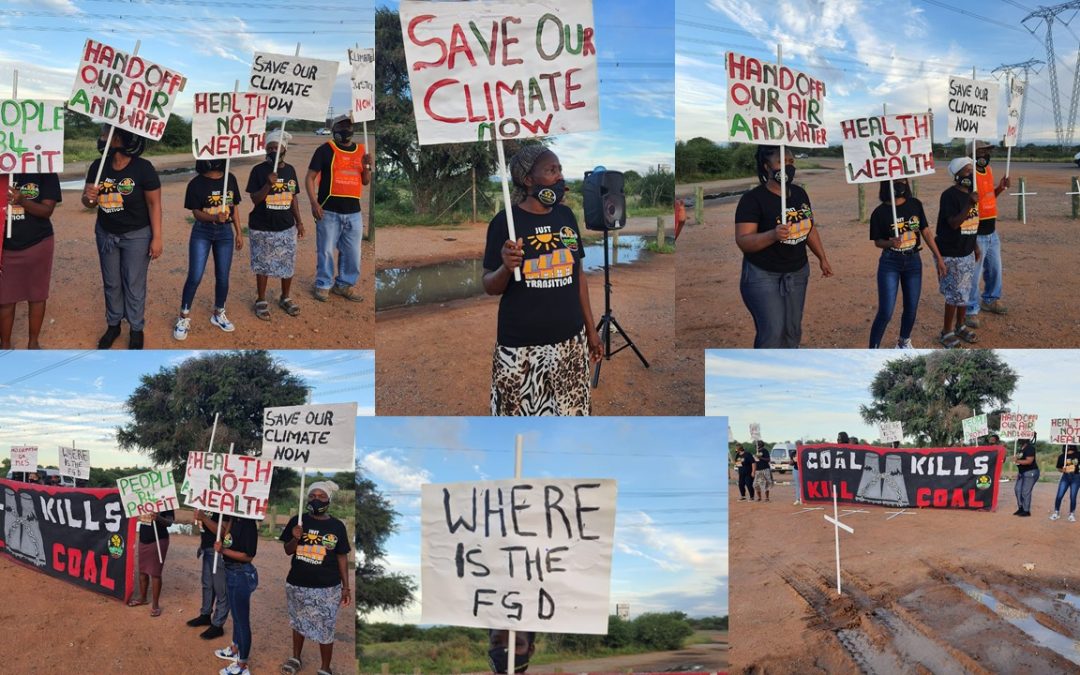 On Friday 16 October, Earthlife Africa Johannesburg and its partners in the African Coal Network joined worldwide protests against the World Bank’s fossil investments, instead of assisting the move to a just energy transition, even as the world faces a climate catastrophe. Despite its climate pledge, the bank has invested over $10.5 billion in fossil fuels since 2015. So, from Nepal to Chile, Colombia to Zambia to South Africa, people took a stand on World Bank Action Day.

In South Africa, according to its loan agreement with the World Bank, Eskom promised to install FGDs, used to remove sulphur dioxide (SO2) from exhaust flue gases of fossil fuels, thereby reducing SO2 emissions in the air. At this stage the two power station emits three times as much SO2 than the whole of Britain.

But, not only is Eskom NOT keeping their word (FGDs will not be installed until 2030), it is now also applying for permission NOT to keep to the law regarding minimum emissions (MES). In other words, Eskom wants permission to break the law and pollute the air more than the minimum standards of the law prescribe. This means in effect that Eskom will have the right to pollute more and for longer than the law states and also more than its agreement with the World Bank required.

Earthlife joined the online Twitter storm, part of the action, to show dissatisfaction with the World Bank. https://worldbankactionday.org/

See the press release below (originally shared on 16 October 2020, and produced by the Life After Coal campaign), which lays out some of the key issues with the World Bank, and its funding of fossil fuels.

Eskom’s catastrophic Medupi project was in trouble from the start. The World Bank came to Eskom’s rescue in 2010 with a massive loan that made the project possible. It said the funding would bring financial stability to Eskom, support future economic growth, contribute to poverty alleviation, and help South Africa onto a ‘low carbon path’.

groundWork, Earthlife Africa and more than 200 supporting organisations warned the World Bank that it would fail on all counts. It would destabilise Eskom and the country’s economy, exacerbate poverty and add 30 million tonnes of carbon to South Africa’s annual emissions. And so it has.

Electricity tariffs escalated making it near impossible for the poor to afford it and the inequality gap has widened, Eskom is teetering on the edge of collapse and is dragging the South African economy down with it, the plant is not meeting minimum emission standards for sulphur dioxide emissions and its air pollution is deadly to people’s health. The debt costs have skyrocketed and are now burdening the poor of South Africa with a dollar-based debt, while they cannot afford the high price of energy.

It must also be remembered that the World Bank along with the International Monetary Fund were accomplices of the apartheid regime, a relationship that lasted for decades. The Bank went as far as to violate the UN embargo against the racist regime at the helm of South Africa, and also defied a resolution of the UN General Assembly recommending all UN affiliated agencies – including the World Bank – to stop financial support to the South African apartheid regime.

The World Bank also promotes the privatisation and/or commercialisation of public utilities and insists on cost-recovery, which results in poor people being cut off from electricity supply.

South Africa remains the largest emitter of greenhouse gases (GHGs) on the continent. A recent report by German environmental group Urgewald reveals how the World Bank Group has continued to support and invest in fossil fuels despite pledging to fight climate change. It has spent over $2 billion on fossil fuel projects in the past two years.

The World Bank loan to Medupi represents the continuation of support to the violation of human rights. The Bank remains a key facilitator of energy poverty and environmental destruction. This is an odious debt. Not only should it be cancelled, but the Bank owes reparations. It must take responsibility for the damage done and use its position with Eskom and the South African government in support of a just transition.

Here is a cool video by Urgewald https://www.youtube.com/watch?v=gptjs-N_p_o