RESIDENTS OF LEPHALALE TAKE TO THE STREETS – “THERE IS LIFE AFTER COAL. STOP KILLING US!” 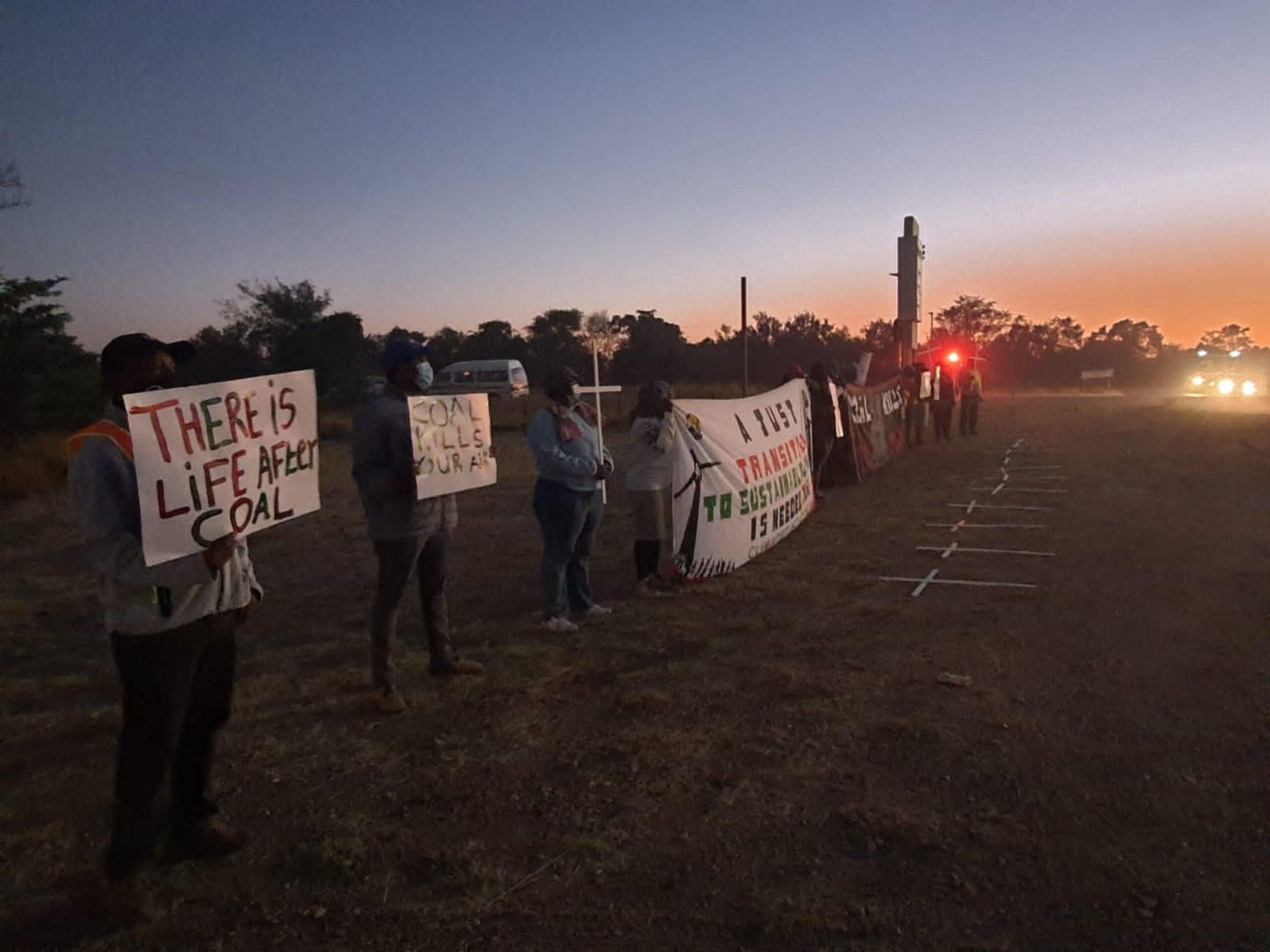 In the early hours of 13 May, just before the crack of dawn, Earthlife Africa (Johannesburg) joined residents of Lephalale in Limpopo in a small demonstration to create awareness of the threats from coal, and the impact this fossil fuel is having on communities in the area.

Lephalale residents say, “We are very concerned about the coal industries in our region and how it affects us. Coal plays a major role in the intensifying climate crisis and this directly affects the future of the people of Lephalale and “life as we know it”. This is why we stood at the Exxaro Marapong crossing to call on Minister Gwede Mantashe stop choosing coal, which not only destroys our environment but also kills fellow South Africans!”

According to Earthlife’s Coal Campaigner Thabo Sibeko, “The minister is supposed to deliver the country’s energy budget speech, next week. We hope to see the phasing out of destructive coal mining and coal-fired power stations, which are major contributors to climate change. If South Africa continues to chase coal, we will only see the extreme weather events like floods, droughts and rising temperatures get worse. Consider the recent drought and the impact of Cyclone Eloise, which hit Mozambique earlier this year, and you will realise that the people of Limpopo, Mpumalanga and surrounding areas are already severely affected by climate change.”

According to Earthlife’s Elana Greyling, “Lephalale is home to the Grootegeluk mine (Exxaro) and Eskom’s Matimba and Medupi power stations. People of Marapong literally live in the shadow of the power station and downwind of the mine’s ash dumps. The impacts to Marapong, and the whole of Lephalale, are very real. Apart from pollution, Lephalale bears testament to the transition, when a major project like the construction of Medupi comes to an end. People now have even less jobs than before the project began.”

On 13 May, communities from Lephalale in Limpopo held a small demonstration at the Exxaro Marapong crossing to call on Minister Gwede Mantashe stop choosing coal. Residents say they are very concerned about the coal industries in the region – which play a major role in the intensifying climate crisis – and its effects on the people.

Lephalale resident Ntate Lesetja Molokomme says, “People are blinded by promises to the short sightedness of these industries because we are desperate for jobs. Even as far up as the traditional leaders, people lack the knowledge to know that the promise of jobs and money will kill their people and their planet.”

He says, “The time for the just transition to socially-inclusive renewable energy has come. This type of decentralised energy system has a better chance of empowering our people. Our leaders, who seem to be stuck in a fossil fuel past, must realise that their decisions must be for the good of all South Africans, even for future generations. The Musina-Makhado Special Economic Zone (MMSEZ) is another mega-polluting coal project being proposed, which will only make things worse in this province. South Africa must end its dependence on coal, it is killing our future,” concludes Sibeko.