Weak Consultation on MMSEZ and Other Projects, Means More Education is Needed on Environmental Laws Following the questionable attempt at online public consultation regarding the Musina-Makhado Special Economic Zone (MMSEZ) last week, Earthlife Africa Johannesburg says it is more determined than ever to ensure that communities affected by large projects around the country know and exercise their environmental rights, as stipulated in the National Environmental Management Act (NEMA).

Earthlife’s Coal Campaigner Thabo Sibeko says, “As we head towards Social Justice and also Environmental Health Awareness month in February, we are extremely adamant that citizens not only be included in the processes associated with new project proposals, but also that they are fully aware of all the ways they can protect themselves from profit-driven projects that promise the world but far too-often fall way short of these promises.”

Sibeko says that while Earthlife agrees that virtual meetings around this project can continue during lockdown, this cannot in any way be considered as meaningful public consultation, and certainly cannot be a deciding factor, since it most-likely side-lines a lot of important stakeholders. Too many people cannot attend due to connectivity issues, a lack of access to data and smart technology.

“Some of the main concerns related to the consultation process and approval for the project. Many people felt as though the approval for the MMSEZ project was a foregone conclusion, and as such, undermines the existence of tribal councils and communities in the area. For many, this was the first time they heard of the project or that they were required to participate. A number of community members indicated that they were willing to consider the merits of the project, but did not know enough about the risks, to make informed decisions,” adds Sibeko. 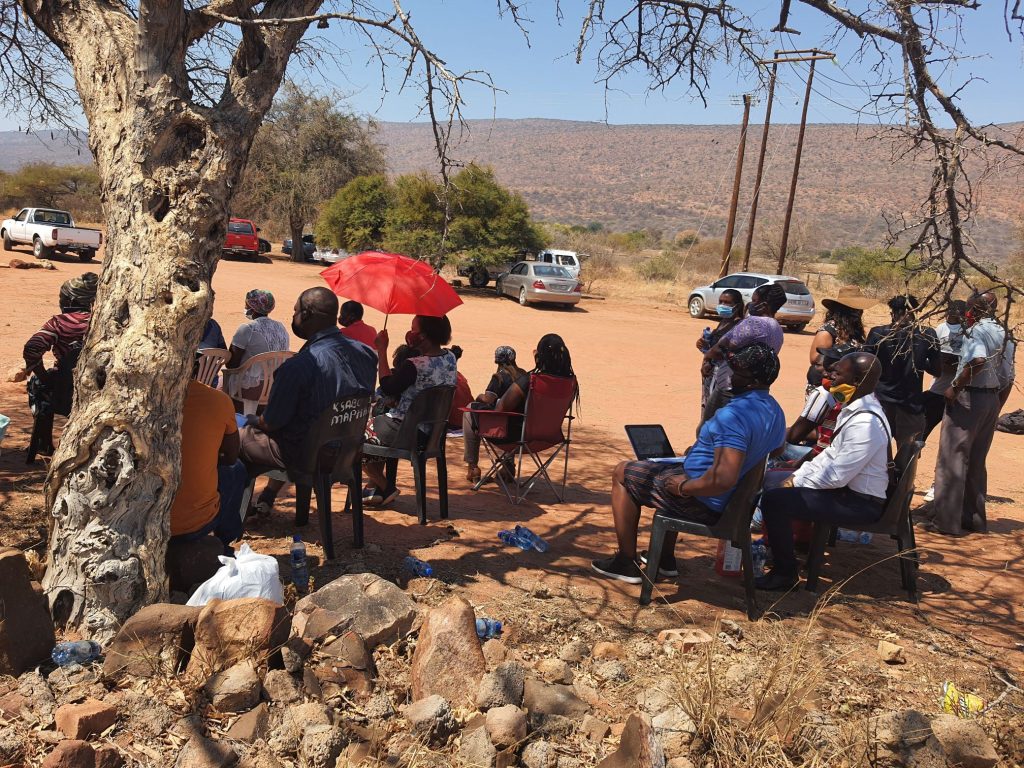 Communities gathered outside Lekkerlag Primary school in Makhado in Limpopo. They say they need to know more about plans for water for the project and how it will affect the people in the area, and also about the measures they will use to reduce the massive pollution that will come from the MMSEZ.

Community member Puluso David Tshidzumba says, “The question is, will it improve our lives or will it leave us worse-off than before the project? A lot of the information did not add up, so I still have a lot of questions about what they will do about securing water. This project is going to need a lot more water than we have here in Limpopo. What will happen to us? We also need to know more about the measures they will use to reduce the massive pollution that will come from the MMSEZ because in Limpopo, many are already suffering as a result of pollution.”

Another community member Rendani Nematswerani adds, “We want to know both the advantages and disadvantages, should we allow such a project to go ahead in our community. The NEMA says we should be involved in meaningful public participation so that we can consider, for ourselves, the various aspects of the project that could impact us. But, up to now, there has been no meaningful engagement between us the promoters of this project. And yet they are talking about uprooting more than one hundred thousand trees, even endangered species, many of which form part of our cultural heritage, just to clear MMSEZ site. What impact will this have on the social fabric and our relationship we have with our environment?”

“And since, in terms of the Paris Agreement, South Africa will revise its Nationally Determined Contributions (NDCs), it is unacceptable to proceed with a project that could contribute up to ten percent (10%) of the country’s carbon budget. And if we want to align with the Agreement’s aspiration of limiting heating to 1,5 degrees, this contribution goes up to an unacceptable 16%. The more you dig, it becomes clear that no less than an inch of the EIA allows for this project to be even considered!”

Lekalakala says that it was the deterioration in meaningful public participation, especially as part of EIAs, in the country that led Earthlife Africa to create the ‘People’s Guide to Environmental Rights – a guidebook to help South Africans understand and protect their environment.’ (Download it here.)

Says Lekalakala, “We want to encourage all South Africans to take a more active interest in what is happening to their environment, and what they can do to protect it. The public participation booklet ensures that the tools and information they need, is accessible and easy to follow. It looks at all the relevant laws and official NEMA requirements, in a way that makes it easier for affected communities to know when, where and how they should be involved in determining the feasibility of these projects.”

“Government and private companies have a habit of only highlighting the benefits of projects, while downplaying the negatives. All around the country, South Africans are battling the same issues in this regard. From the West Coast in the Western Cape, to the Xolobeni in the Eastern Cape, to Somkhele in KwaZulu-Natal and the MMSEZ and more in Limpopo. It is therefore so important that citizens feel equipped and informed enough to ask the right questions and not just take the word of those who are pushing for these projects,” concludes Lekalakala.