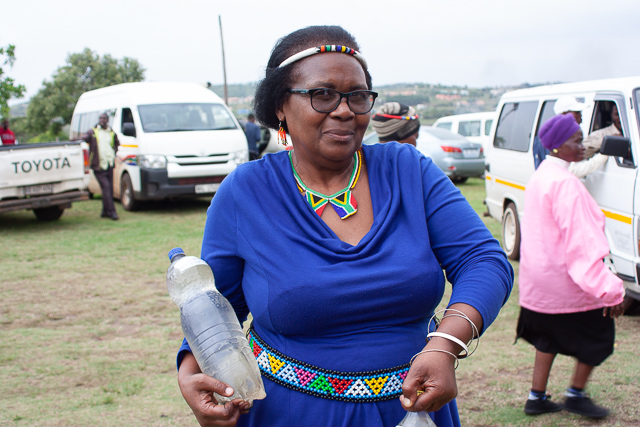 ANOTHER DEFENDER, OF ENVIRONMENT AND COMMUNITY, MURDERED – WE SHOULD ALL BE CONCERNED! #RIPFIKILENTSHANGASE

Last week, the assassination of Mama Fikile Ntshangase – who was involved in a legal dispute over the extension of a Tendele coal mine in Somkhele in KwaZulu-Natal – sent shockwaves through the country.

We, at Earthlife Africa Johannesburg, join the rest of the country in sending our sincere condolences to Mama Ntshangashe’s family and loved ones. While we mourn her loss, her death will serve as another reminder that we, the people, have to stand firm in our efforts to protect each other’s rights.

As an environmental justice organisation active in the coal space, we know Mama Ntshangase to be a disruptor of the best kind; disrupting business as usual in her efforts to serve her people and eliminate corruption. We will not be deterred by her passing, but will work even harder to be even louder about the injustices so many South Africans face, many of whom have no champions, like Mama Ntshangase, in their corner.

See more information and further context/background in the joint media statement (shared on Friday, 23 October 2020), from the Mfolozi Community Environmental Justice Organisation (“MCEJO”) and its partners/supporters.

“I refused to sign. I cannot sell out my people. And if need be, I will die for my people.” Tragically, grandmother Fikile Ntshangase’s words became a reality when she was gunned down in her home at Ophondweni, near Mtubatuba, on the evening of 22 October 2020.

Mama Ntshangashe was the Vice-Chairperson of a sub-committee of the Mfolozi Community Environmental Justice Organisation (“MCEJO”). MCEJO has been challenging the further expansion of a large coal mine at Somkele in KwaZulu-Natal by Tendele Coal Mining (Pty) Ltd. One of the court cases brought by MCEJO is scheduled for hearing in the Supreme Court of Appeal on 3 November 2020.

On Thursday, 22 October 2020 at about 18:30, four gunmen arrived at Mam Nsthangase’s house, where she lives with her 11-year old grandson. Current reports say that they forced themselves into the home and shot her 5 times, and that she died on the scene.

Tendele’s coal mining operations have caused untold destruction of the environment and the homes and livelihoods of the residents of Somkhele. (Photographs and video footage available.) Over the past few months, tension has been rising in the community over the proposed expansion of Tendele’s operations, and MCEJO’s opposition to that expansion.

Recently, Tendele was pushing for an agreement to be signed between MCEJO and Tendele to the effect that MCEJO would withdraw its Court challenges of Tendele’s expansion of its coal mine at Somkhele. Mama Nsthangase refused to sign the “agreement”, which certain of her fellow sub-committee members signed, purportedly doing so on behalf of MJECO.

Days before her brutal killing, Mama Ntshangase stated her intention to write an affidavit, revealing that sub-committee members had spoken to her of a payment of R350,000 in return for her signature.

The court challenge that placed a price on Mama Ntshangase’s life is MJECO’s pending review application of Tendele’s new mining right in respect of a 222km2 area in Mpukunyoni, KZN. This review is due to be heard by the North Gauteng High Court in March 2021.

Tendele has publicly characterised MCEJO’s legal challenge as a threat to the mine’s continued existence, stating that, with the current mining area depleted, it needed to expand its mining area, or face closure.

The expansion requires relocation of 21 families (19 of them MJECO members) from their ancestral land. Many of these families have lived on their land for generations.

Tendele cannot commence any operations in the new mining right area until these families agree to Tendele’s “compensation” offer and sign relocation agreements. These families were subjected to months of violence and intimidation. Despite the clear volatility of the situation, Tendele has accused these families of “holding the Mine, its … employees and many families who have signed [relocation] agreements and indeed the entire community to ransom”.

Tendele carried out its pressure campaign even while these families were receiving anonymous death-threats and gunmen opened fire on one of the families’ homes.

In May 2020, Tendele tried to bring an urgent court application to force the families to accept their compensation offer, but abruptly removed the matter from the Court roll when the families opposed the application.

Tendele has now embarked upon a campaign to pit the State, the Ingonyama Trust Board, traditional leaders and fellow community members against these families to pressure them into signing relocation agreements. Tendele requested the MEC for Transport, Community Safety & Liaison KZN, Minister Ntuli and department officials to set up a “task team”, with the aim of “the two court cases opened by MJECO against the mine remain a threat and needs [sic] to be withdrawn”. This Task Team has since described their role to include “deliberat[ing] on the court cases which pose a threat”.

It is against this backdrop that the pro-mining campaign was stepped up during the past week. On 15 October, two sub-committee members, accompanied by two known hitmen, tried to disrupt a MCEJO executive committee meeting with community leaders, which included Mama Ntshangase. One sub-committee member tried to lock the doors, and a prominent leader was assaulted. A criminal case is being opened. This leader, who works in another area, has been warned that his life will be in danger if he is seen in the vicinity.

Billy Mnqondo, a founding member of MCEJO, reports that one of the hitman kept saying “kuzochitheka igazi” (there will be bloodshed). His appeal to the police is: “Make sure that the criminals who murdered our comrade are caught and go to jail. Mam Ntshangase was killed for standing up for what is right. This is wrong and cannot go unpunished.”

It appears that the mine is being supported by the KwaZulu-Natal government. In July, the Department of Community Safety and Liaison sent a staff member, apparently from its Civilian Secretariat arm (which is conspicuous in its absence whenever the threat of violence looms), to persuade community members to negotiate with the mine.

Since then, after MCEJO members thought it only proper to approach the office of the Ingonyama King Goodwill Zwelithini about their struggle, they have come under even further government pressure via the office of the Premier and COGTA. This is the self-same government that claims to be a custodian for land reform to redress the land imbalance – while wilfully pushing to displace rural farmers from their family land from which they subsist.

For the State and Traditional Authorities actively to assist Tendele in its efforts to orchestrate a withdrawal of MJECO’s review application is abhorrent to our Constitutional order. Without access to Court, local communities’ right to dignity and section 24 environmental rights are illusory.

The strategies used by Tendele are sadly typical of many companies operating in impoverished rural communities. Mines dangle incentives to impoverished community members with the inevitable consequences of stirring deep community divisions, which almost always lead to violence and deaths. In rural areas that are difficult to police, it takes someone with the determination and the courage of Mama Ntshangase to promote community solidarity and resistance in the face of these strategies. There are other leaders of this calibre in MCEJO and, if anything, the assassination of Mama Ntshangase has renewed their determination to step up the fight against exploitation by the mine.

We mourn the senseless tragedy of Mama Ntshangase’s murder, and condemn her killing.
We call on the South African Police Service to act swiftly to arrest and prosecute her murderers.
We call on Tendele to stop its campaign of dividing and fomenting violence in the affected community of Somkhele, and to provide funds for Mam Ntshangase’s funeral and for maintenance for her orphaned grandson.

We stand by all defenders of land and environmental rights, and will act to defend their Constitutional rights to life, dignity, free speech, access to justice, access to food and water, and an environment not harmful to health or wellbeing.

Press Release shared on behalf of: