Peaceful demonstration at DMRE: Earthlife Africa and youth from the Climate Justice Action Group say “NO!” to Nuclear Energy 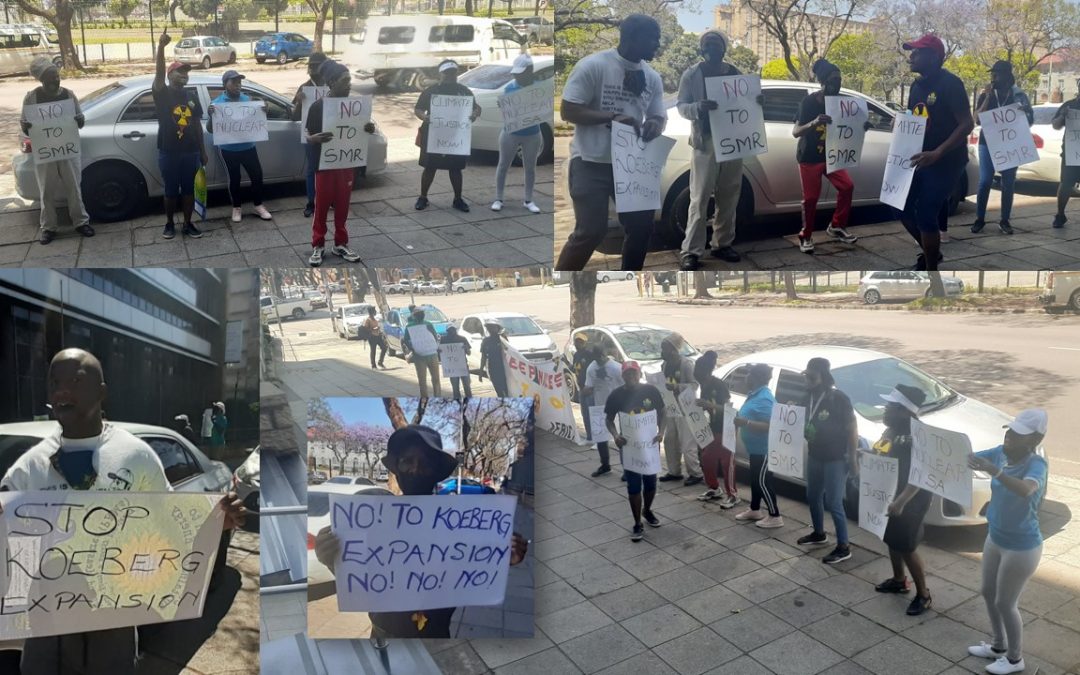 On 15 October, Earthlife Africa Johannesburg and a number of its youth partners from its Climate Justice Action Group (CJAG) hosted a peaceful placard demonstration to say “NO!” to nuclear energy. The group of youngsters say they are against government’s proposed plans and recent actions in nuclear and want to draw attention to the ongoing, often suspicious nuclear dealings.

This comes after it was recently revealed that Eskom had spent around R5-billion on new/replacement steam generators for Koeberg Nuclear Power Station, even though the plant reaches its end-of-life by 2024. They do not support the plant life extension of the plant. The youth are also protesting the government’s ongoing push for new nuclear, this time for Small Modular Reactors, saying that they rather want to see more decisive action on the issue of climate change.

“We are out here, struggling to survive. The youth of South Africa have very little opportunities, especially now with CoVid-19, on top of everything else. No food. No jobs. And yet, the government continues to play with our future, spending all this unnecessary money on a dying technology. By doing this, we will be saddled with more debt and we will be the ones left to deal with highly-toxic and radioactive waste – for which there is still no permanent solution – and will be our problem for years to come,” says Earthlife’s Ulrich Steenkamp.

“The youth of this country needs the government to think about our future, and nuclear is not it. The focus should be on developing and innovating in renewable energy, especially since climate change is going to affect us more, in the future. South Africa could be a real renewable energy powerhouse, if we had the support from government,” he says.

Steenkamp says that SA youth are saying “No to Small Modular Reactors (SMR)”, “No to Koeberg Expansion” and they want “Climate justice now!”