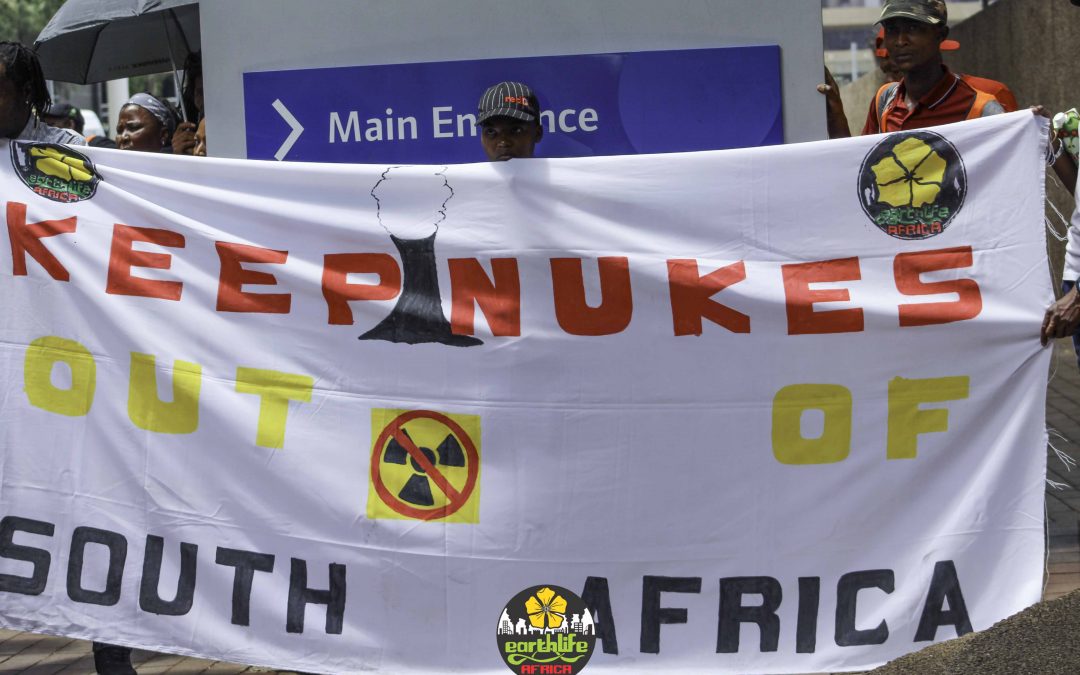 Friday 5 February, is the deadline for South Africans to submit comments to the National Energy Regulator of South Africa (Nersa) on whether or not they agree with a new proposal to add 2,500MW more nuclear power to the country’s electricity system. The Southern African Faith Communities’ Environment Institute (Safcei) and Earthlife Africa Johannesburg (ELA) have long campaigned on nuclear energy issues and are not in favour of more nuclear energy.

They contend that nuclear energy is not only unnecessary, but also unsafe and expensive. Safcei and ELA believe that the billions that nuclear energy would cost (conservative estimates are around R330-billion), would be better spent to address basic household electrification, community-owned renewable energy sources, housing, social grants and now, procurement of the COVID-19 vaccine.

Earthlife’s Makoma Lekalakala says, “Even though nuclear energy can be a complicated and technical issue, which can leave many people feeling as though they have no place contributing to the conversation, at the heart of it, the key issues are simple. First, there is no safe, permanent solution for dealing with the high-level radioactive waste (HLRW) created. At Koeberg Nuclear Power Plant, for instance, all HLRW is stored in temporary cooling pools on-site. And, as this toxic waste increases every year, so too do the number of people living in communities in close proximity to the plant, who will be exposed should there be an accident.”

Safcei’s Francesca de Gasparis says, “As a multi-faith environmental justice organisation, we believe that government needs to be more transparent and engage in meaningful consultation with the public on these important decisions. We have been given too little information about the plans for nuclear and how it could affect South Africans. Even after numerous PAIA requests about feasibility studies and other information, we have received no response. This means the general public are not being given the information they need to make informed decisions about these plans. Yet, as per the constitution, we have a right to access information that should be in the public domain, so that we can decide for ourselves whether this will be good or bad for us in the long-run.”

“The lack of transparency or meaningful attempts at public dialogue, when coupled with the most recent energy plan IRP2019 – that shows more nuclear energy is not necessary for our energy future – will be reminiscent, for those who have been following this issue, of prior attempts to install nuclear energy without public consent. This was one of the key reasons that the previous nuclear deal was declared illegal and unconstitutional by the High Courts in 2017,” says de Gasparis. 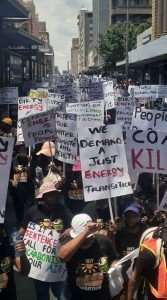 Activists demonstrating for Climate Justice and a Just Energy Transition during a Earthlife Africa’s march last year in December.

Lekalakala adds, “On top of the unresolved waste issues, nuclear plants – whether big or small – are very expensive to set up, are often marred by cost overruns and construction delay and decommissioning costs are rarely taken into consideration in initial cost analyses. In the face of the CoVid pandemic and the economic disaster it has created for the country, South Africa cannot afford to spend the little funds we have, on this dangerous and failed technology. The government should rather use this money to start rebuilding our communities. By deciding to procure more nuclear energy, not only do we risk further economic instability of this country, but there are also risks to people’s health and safety, and to the environment.”

According to Thabile Tshabalala from Mmamohau Community Care and Support in Soweto, “This Social Justice Month South Africans should exercise their civil rights by participating in what may be one of our country’s biggest decisions, for the next decade. Do not refrain from participating because you do not understand all the technical stuff. Public comments do not have to be technical, but can also focus on what people are most concerned about when it comes to this issue. If you need to know more about how this decision will affect you, then that can be included in your submission.”

Tshabalala, and also a member of Earthlife’s Women in Energy and Climate Change Forum (WECCF), says that this could show that not enough effort was made to educate the public, which has merit, since Nersa must consider all comments submitted. People could also send in a submission that requests the opportunity to make an oral submission, which should take place as part of Nersa’s process.

Submit your comments to Nersa on irp-procurement.newcap@nersa.org.za or send a fax to 012-401-4700, or sign this petition https://awethu.amandla.mobi/petitions/nuclear-plans-could-go-ahead-if-we-don-t-object-by-5th-february