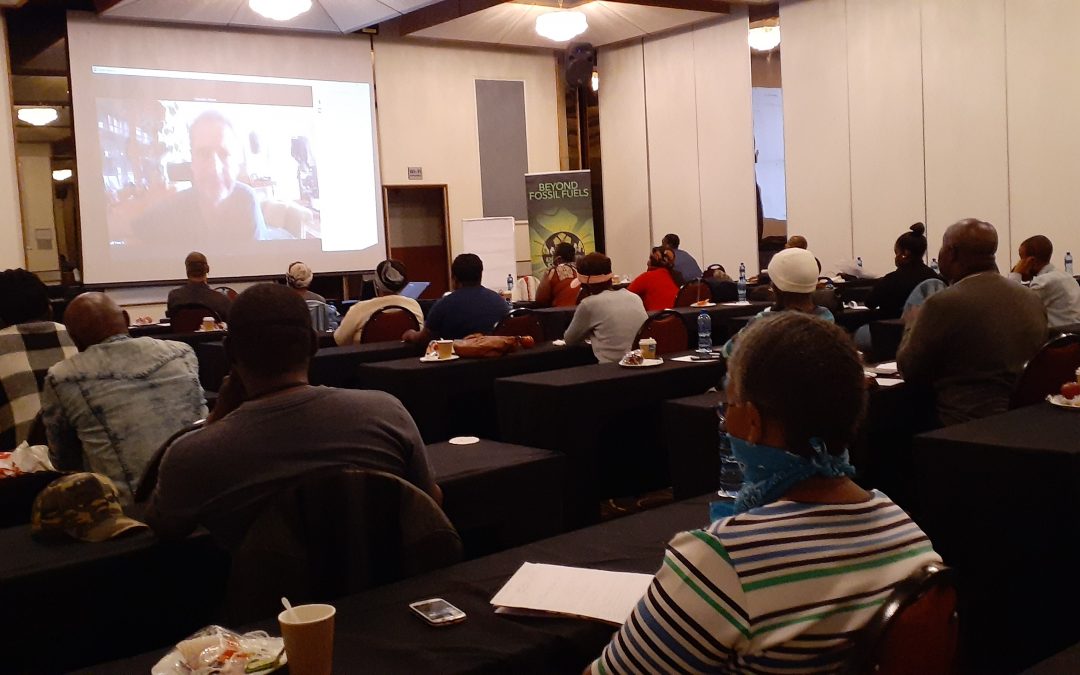 In our work with communities in Gauteng, Limpopo and Eastern Cape we often find that, even though they are the ones who will be most affected by developments proposed in their areas, they are often left out of decision-making processes. This is often a result of not knowing their environmental rights.

In an interactive workshop – which took place on 23 and 24 November 2020 – Earthlife’s Legal Consultant Brandon Abdinor worked with 32 participants, from these communities, to explore the types of environmental impacts most commonly seen, their root causes, and the various aspects of South Africa’s environmental rights/laws in place to prevent this from happening.

He says, “The process – which focused especially on water, climate, pollution, health, and food security – was immeasurably enriched by hearing about participants’ on-the-ground experiences and concerns. And, as people started to “join the dots”, we were able to facilitate a deeper understanding of the wide range of issues and dynamics that come into play in this arena of environmental rights and protection. For many, it also became clear that while the laws are very good on paper, in practice, they are very often disregarded by decision-makers and developers.”

Discussions also touched on the rights that people have versus the rights of nature, with a deep-dive into the National Environment Management Act (NEMA) and how it seeks to ensure sustainable development, in addition to inclusive, transparent environmental decision-making. The laws related mining, air quality and water use were also covered. The issue of climate change was also unpacked – what it is and how it can impact people, now and into the future – and expert and activist Peter Becker was there to provide more information on the hazardous nature of nuclear energy generation.

The process of environmental impact assessment was also covered, with an in-depth focus on public participation and how people are entitled to have their voices heard in matters that impact on their environment. There are numerous avenues available to protect people’s rights. These can include legal action, protest action, lobbying, publicity, storytelling, and networking.

Nompumelelo Madubane says, “The most important thing I have learnt, is that we have rights. The environment has rights, which should be upheld by government. But, big polluters like Eskom and Sasol, they do not follow the law, and our government lets them get away with it. This training has given me the courage to stand up when I see that thing are wrong and it has taught me that we do not have to agree with everything. I must ask questions, like for example will the project cause pollution?”

She adds, “What I have found out is that many in my community do not even know that we have the right to an environment that is not harmful. And because we don’t know what to do, we wait for government to do for us. But, the more we know and with more of us in the know, we can unify our fight to better protect ourselves and our communities. If government and companies do not respect our right, we can take them to court. More people should learn about this.”

Bongani ka Mthembu says that he felt empowered after the training because he learnt so much about his various Environmental Rights and also about the NEMA.

Farhana Mathabo Mahlatsi says, “I have learned that in today’s society we take many things for granted, especially the environment we live in. I think it is the result of a lack of knowledge because now that I know, I see things differently.”

Daniel from Boitumelo Youth says that he found the workshop useful, especially since he is now an environmental justice activist who needs information and tools to know and exercise his environmental rights, and also his right to public participation.