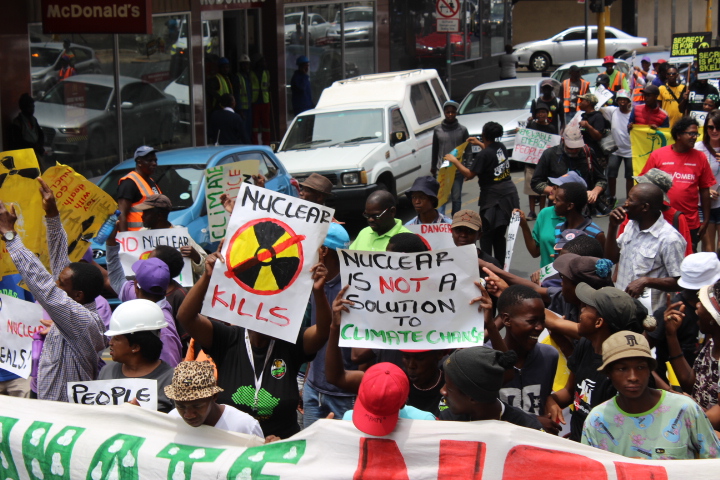 Following recent meetings with communities in Limpopo, Gauteng and Eastern Cape, the team at Earthlife Africa Johannesburg (ELA) are more committed than ever to continue its work, bridging the gap between the people and the information they need to be actively involved in decisions that affect them. The NGO has quickly adapted to the ‘new normal’ of online mobilisation, as a result of the Covid-19 pandemic, but says that many South Africans, especially in rural locations, do not have internet access, and therefore are not informed nor part of the conversations currently taking place.

According to ELA’s Makoma Lekalakala, “The communities we work with have made it clear that they want to be informed, so that they can be more involved, but are often left in the dark. How can people hold government accountable for its actions, if they do not know what it is doing? At this time, when the people are preoccupied with surviving the severe impacts of the Covid lockdown, while still living with the constant threat of load shedding, the government needs to halt all major decisions, until citizens are able to participate in meaningful ways.”

ELA’s Nomalizo Xhoma from Gauteng says that one of the biggest developments in SA’s energy space, is the Department of Mineral Resources and Energy’s (DMRE) renewed moves toward exploring the option of nuclear. This time the idea is to pursue privately funded, owned and operated small modular reactors (SMR), which will be transferred to government, once fully paid.

“These SMRs are problematic for a number of reasons. These are still a centralised form of energy that does not serve the wider energy needs of the country. We need a more decentralised approach. The viability of SMRs are also questionable. With regards to this initial phase of Requests for Information (RFI), more money will be spent, money that could better serve our communities who are under a lot of pressure, even though the country’s Integrated Resource Plan (IRP) makes no mention of new nuclear,” says Xhoma.

Xhoma says that every few years the SA government attempts to re-introduce new nuclear to the country’s energy portfolio, and usually on the back of debilitating load shedding. However, they always seem to want to do without any meaningful public participation or education about all the risks. She says that communities are calling for more renewable energy, to move SA toward the just transition that could lead to widespread community empowerment, if implemented properly.

According to ELA, before government wastes any further public funds, more meaningful public debate around all the issues relating to nuclear is needed. As the most expensive form of electricity, this technology is steadily being abandoned worldwide, as a result of issues relating radioactive waste, which up-to-now has no safe, permanent solution.

Xhoma adds, “Also, nuclear energy will not result in meaningful jobs for South Africans. These facilities need highly-skilled personnel with specialised expertise (who will likely come from outside locations), with only low-level jobs will likely be available for locals.  Koeberg may seem cheap now, but that is because it was built long ago and has already been paid off. Also, we very seldom hear about all the hidden costs of nuclear. If we look at the bigger picture of nuclear, are we really gaining?”

Climate change is also an important consideration. The country’s policies must adapt to the times, but it often seems that vested interests are pushing their agenda, at the expense of the people. South Africa must move forward with a just energy transition because not only are natural fossil fuel resources finite, carbon (CO2) emissions must be capped to prevent a climate catastrophe. The moves needed to address climate change must however consider our local context and we need to see it reflected in our National Development Plan (NDP).

Pheko Mofokeng from Phaphamang Community Organisation says, “We are grateful that ELA continues to keep us informed of what is happening. Many of us here in Sebokeng Township never knew that the government wants to spend more money on nuclear energy, at a time that we are fighting to survive the lockdown.”

Melikaya Blani in Port Elizabeth says, “Very few people know about the DMRE’s proposals for new nuclear. This is evidence that we need the government to make more effort to ensure that its people are informed. We need open debates, with inputs from all those citizens who will be affected –and then make decisions based on what is most in the public’s interest.”

“Only in Africa – at a time when former nuclear countries worldwide are turning their back on this failed technology (having first-hand experience) – is anti-nuclear seen as counter-revolutionary, with supporters of renewable energy are seen as backward. Unfortunately, this issue has become quite politicised in the Eastern Cape. Yet, without the political will to address the issue of climate change and how these are affecting the lives of the people on the ground, we will continue to be stuck. Just because you believe something is good, does not make it so,” says Blani.

Xhoma concludes, “There are numerous examples of bad decisions taken by government over the years, evidence that more meaningful public engagement is crucial. Just look at Medupi and Kusile. There are many issues there. Till today, neither plant has ever run at full capacity, but now government wants to try another thing? Why not first fix what is broken? We encourage people to have these discussions at home and in their communities, to ensure that more people know about the issues that could come up.”

For more information or to add to the conversation, find Earthlife Africa Johannesburg on Facebook and Twitter.